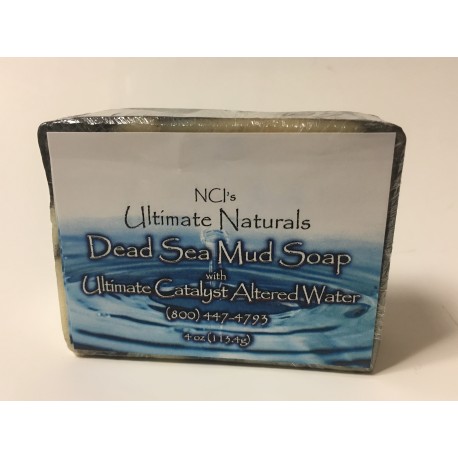 Item No. E-103* -- Ultimate Naturals Dead Sea Mud Soap - $0.00 at checkout since the pandemic has left some ingredients hard to get at times, we will not charge until we know we can ship.. Details: Scroll Down

Item No. E-103* -- Ultimate Naturals Dead Sea Mud Soap with Ultimate Catalyst Altered Water (formerly Ultimate Dead Sea Soap & Bath Bar). Regarding the name change -- the soap is exactly the same as before but with a new name and label.  For more information on the name change, go to PAGE 5 of our June/July 2018 Newsletter.

So, what have some of the people who have used our Ultimate Naturals Dead Sea Mud Soap had to say about it?  A number of people have said their skin feels different after using it… smoother, softer, more supple. Others comment on the fact that their skin feels “just washed" for much longer than it does after being washed with other soap... it seems to grant greater “staying power” to that clean feeling.

Others say their skin starts looking better, softer, and younger.

Many people note that Ultimate Naturals Dead Sea Mud Soap feels much more soothing, relaxing, and luxurious than other soaps have ever felt to them.