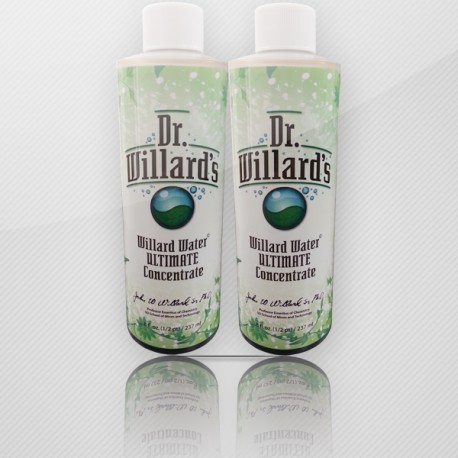 (Item No. D-8Pak) ULTIMATE Concentrate: This is the most popular version with our customers of the three versions of Willard's Water formulated by Dr. Willard, and is the one Dr. Willard told us he regarded as his best.  It is also regarded as the best by the vast majority of our customers.

(Item No. D-8Pak) ULTIMATE Concentrate: These two 8-oz Bottles will make 16 gallons (typical 2-month supply for one adult) of the product as it is normally mixed for use (1 ounce to 1 gallon of water).

ULTIMATE, CLEAR, or Dark? The ULTIMATE is by far the most popular of the three versions. It is also the one Dr. Willard told us he regarded as the best.

Tests comparing the performance of the three versions on people led one researcher to summarize the differences by saying the Ultimate is so much better "it's not even in the same universe as the Clear or Dark".

Reasons some people prefer the CLEAR: People who are sensitive to “just about anything and everything” generally start out with the CLEAR, since there is “less in it to react to” without the minerals that are in the Ultimate and the Dark.  If using it in one's eyes, Dr. Willard suggested the CLEAR, since hypothetically if the nutrients in the ULTIMATE or Dark came out of solution, they might be a larger particle than would be desirable in your eyes. We have never heard of this happening, but better to be cautious. (There is nothing harmful in the ULTIMATE or Dark... just a concern about any potential problem with the particle size.) And, some people just prefer the color of the CLEAR (basically colorless), since it “looks like normal water”. Others like the ULTIMATE because it does look different than normal water after it's mixed up for use… is a pale amber color similar to weak iced tea or weak apple juice, which makes it obvious to them if they’ve “mixed it up or not”. The ULTIMATE is quite dark in the concentrate but, as noted, is much lighter when mixed for use.

Reasons for ULTIMATE Preference: As previously stated, Dr. Willard regarded the ULTIMATE as the finest of his three formulations and most of our customers prefer the ULTIMATE. Why do people prefer the ULTIMATE? Some say they notice that they want the ULTIMATE more than the CLEAR, and think about wanting some more often than the CLEAR... in some cases going so far as to say they crave the ULTIMATE but don't crave the CLEAR. Many natural health experts say any craving often indicates the person with the craving has some sort of a mineral deficiency. Perhaps the minerals in the Ultimate may be the reason some people seem to crave it.

For further details on their differences, see the article in our Information area on this site about ALL THREE Dr. Willard Waters Available Here. The DARK is weaker than either the CLEAR or the ULTIMATE, even when mixed at 2 ounces to a gallon as directed, instead of the one ounce to a gallon required for the CLEAR and the ULTIMATE.